Hadn’t seen this till now, from months ago. Plus a look back at golden years. (as some view them) 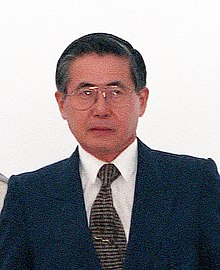 Alberto Fujimori at Andrews Air Force Base in 1998 Wikipedia

LIMA, Peru (AP) — Peruvian prosecutors say they have dropped a criminal investigation against former President Alberto Fujimori and health ministers who served under him over a 1990s mass sterilization program under which thousands of women say they were forcibly sterilized.

The probe had been re-opened in 2011 under pressure from the Inter-American Commission on Human Rights. But in a statement Friday, prosecutor Marco Guzman said he had shelved the inquiry against Fujimori and 26 former high-ranking officials after deciding that no crime against humanity had been committed.

Sigfredo Florian, a lawyer representing the victims, said they would appeal and referred to the forced sterilization case of Mamerita Mestanza. “Only four low-ranking provincial doctors have been accused in the 1998 death of the peasant Mestanza,” Florian said. “And not taken into account were the 140 volumes of evidence from the complaints of the other 2,074 peasant women” who say their tubal ligations were coerced.

Mestanza, a 33-year-old mother of seven, died in 1996 after being pressured into the surgery. Peru had agreed to pay more than $100,000 to Mestanza’s survivors and guarantee her children free education through high school as well as free medical care. But the Inter-American commission, dissatisfied that the settlement was not honored, pressed for a criminal probe.

Fujimori, now imprisoned for corruption and authorizing death squads, claims the sterilizations from 1995 to 2000 of more than 300,000 mostly poor, illiterate indigenous women were voluntary. The women say they were deceived, browbeaten, threatened with jail, bribed with food parcels and otherwise pressured into the operations to meet program quotas.

Activists say that besides being forced, the sterilizations were often carried out in unsanitary conditions. They documented 18 cases of women who, like Mestanza, died of infections shortly after surgery.

Mestanza had been told she needed to be sterilized because women who gave birth to more than seven children were being imprisoned, according to the settlement. In the annals of government-sanctioned involuntary sterilizations, Peru’s appear to be among the biggest in modern history, also affecting nearly 25,000 men.

Fujimori boasted that it dropped Peru’s birth rate from 3.7 children per woman in 1990 to 2.7 children a decade later. Officials of Fujimori’s government claimed any excesses were the fault of overzealous local medical authorities. But the program was so controversial that the U.S. Congress cut aid payments to Peru that had been used to fund the program.

After Fujimori’s government fell in a 2000 corruption scandal, lawmakers initially recommended genocide charges against the president. That probe was shelved in 2009 after prosecutors determined the statute of limitations had run out on the alleged crimes of serious bodily injury and manslaughter.

Reproductive rights activists claimed, however, that the sterilizations constituted a crime against humanity due to their scale and systematic nature.

This took place in the 1990’s and all these years later they decide ‘not enough evidence’ and drop the charges. Sounds suspicious considering the scale. So this was going on while Clinton was in office. Better yet, we had an aid program that even funded it.

From Wikipedia: (had support, including that American aide funding)

From 1996 to 2000, the Fujimori government oversaw a massive family planning campaign known as Voluntary Surgical Contraception. The United Nations and other international aid agencies supported this campaign. The Nippon Foundation, headed by Ayako Sono, a Japanese novelist and personal friend of Fujimori, supported as well. Nearly 300,000, mostly indigenous, women were coercively or forcefully sterilized during these years.

This illustrates the evils of celebrated contraception and birth control programs. At least he was charged on death squads and corruption. Yet while the forced sterilization program was in full force, it received funding from the US and glowing support of the UN.

He is still serving 25 years for death squads and corruption. But sterilization charges and the government enforcers are off the hook.

Although rife with corruption and politics resembling third world class, he was credited with economic reforms and continues to have a popular following. Interesting that his administration played out while Clinton was in office. Clintons benefited from the economy and Republicans’ fiscal policies, and still enjoyed popularity despite all the scandals and their brand of politics. Even now many people nostalgically look back at the golden Clinton years. There are some parallels.