Obama did a surprise visit to Afghanistan but it was more like a sketch from SNL, “Live from Afghanistan… It’s Obama”.

“We are aware of the sacrifices so many have made,” Obama said after a briefing by Marine Gen. Joseph F. Dunford, the top American commander in Afghanistan. “We’ll probably be announcing some decisions fairly shortly.” 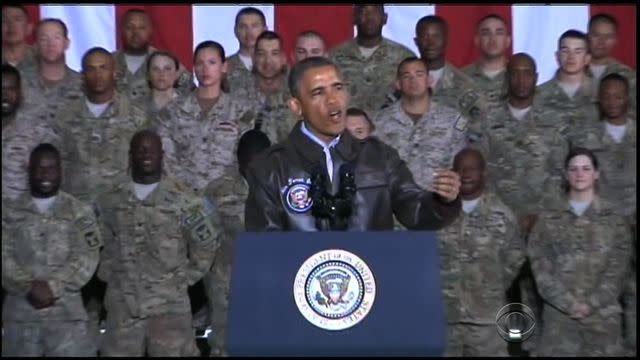 He told them this is the best-led military in history. Hmmm, he couldn’t help that one. He’s just full of self-appreciation. And just years ago he was all about questioning the leadership of the military under Bush. But last Saturday on Armed Forces Day, he was tweeting to the LGBTQ community celebrating anti-Homophobe Day. Yea, that’s important. Not even a tweet for Armed forces Day.

Speaking to the troops he pledged that it’s a sacred duty to take care of the Vets. I can’t help wondering how many moral duties Captain Zero really has? While he’s living large in the White House, vets are rendered to secret lists, which Obama says “if the allegations are true” and hiding, once again, behind an “investigation”. No, the reports are out, you cannot put the secrets back in the box.

Excuse me while I get sick and Obama pats himself on the back. With Obama , scratch that….his politics are always front and center.

“So our combat mission here will come to an end. But our obligations to you and your families have only just begun. The al Qaeda leadership may be on the ropes, but in other regions of the world al Qaeda affiliates are evolving and pose a serious threat. We’re going to have to stay strong and we’re going to have to stay vigilant. And fortunately, we’ve got the best-led, best-trained, best-equipped military in human history. (Applause.) And as Commander-in Chief, I’m going to keep it that way. (Applause.)

We’re going to stay strong by taking care of our wounded warriors and our veterans. (Applause.) Because helping our wounded warriors and veterans heal isn’t just a promise, it’s a sacred obligation. As you come home, some of you will return to civilian life, and we want to make sure you can enjoy the American Dream that you helped to defend. So with the transition assistance to help you begin the next chapter of your life — that’s going to keep America strong. The credentials and licenses to help you find a job worthy of your incredible skills — that will keep America strong. Making sure the Post-9/11 GI Bill is in place and delivering for you the kind of education that you have earned — that will keep America strong. “(Applause.)

Now he is warning us about al Qaeda et al? Where was he 9/11/12? Well, if you cannot keep Vets healthcare up to snuff, then you can at least promise them a job, right?

“I’ve made it clear that we’re prepared to continue cooperating with our Afghan partners on two security missions — training and equipping Afghan forces and targeting — counterterrorism targets against al Qaeda. … And we’re going to make sure that Afghanistan can never again, ever, be used again to launch an attack against our country.”

The al Qaeda that he telegraphed was albeit dead in his campaign. Suddenly, they are back as an existential threat — in all their incarnations? Sounds very confident for someone who cannot deliver for the Vets who made it possible.

If I hear one more word about the pains Obama took to secret his trip to visit troops in Afghanistan, or how they disguised a motorcade transporting him, I’m going to puke. For Obama, the allusions to 911 are just specious means to pat his own back. Remember the “bumper sticker” for the campaign was “bin Laden is dead and GM is alive”. That was code for al Qaeda is dead… and Obama is alive. It was never about one man, whether it was bin Laden or the blind Sheik. However, it is all about one man in the White House.

It doesn’t matter if he is standing at the podium in the Rose Garden or in Bagram Afghanistan, the same politics are center stage. Doing the troops a favor by paying them a visit was really doing himself a favor. A selfie gift. Memorial Day being another holiday to remember Obama. That message always comes through clear, because it is meant to.

At a time when the VA scandal is shredding his leadership credentials, not that he ever had any to begin with, he chooses the time once again to highlight himself. Any mention of the troops and their mission is purely academic to the main point, his political survival. He’s been politicizing the military since before he got into office, so what would we expect now?

May God bless the memory of all the fallen, and America.
RightRing | Bullright