Donald Trump has become the metaphorical candidate, at least for the right. I would say ultimate, but that’s another story.

I was thinking of the debate and what would happen. I pictured Trump standing up there center stage, like he always does. looking back and forth nodding or gesturing. Actually, like a big metaphor. Face it, most of the attention has been on him like it or not.

So what I mean is he has become a symbol or a metaphor of a candidate. He has given voice to opinions and concerns of people. He has taken on the persona of an outsider, non-politician, not the faux outsiders who ran before. Obama tried to run as an outsider pretender. Even as an incumbent in his reelection, the campaign strategized it as an insurgency campaign — a huge stretch. But this is about Trump and the right.

Trump is a branding genius too. Where others play politics, his expertise is in branding and he knows how to make that work to his favor. So he’s given voice and a shelf life to these positions that politicos don’t want to hear. Concerns people have about the country. 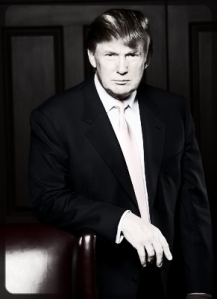 But taking on those positions is one thing, he hasn’t really backed off or changed his mind in the face of critics. Whether right or wrong, he stays with it.

He also hasn’t taken just the easy popular opinion but the difficult non-politically correct ones. And he has appeared to be a flame thrower. He has media and pundits alike at a loss to how to deal with him. Yet at the same time he does plenty of interviews and answers questions, something even career politicians shy off on at times. (like when they go into lock down mode) We haven’t seen Donald in the lock down mode yet. Even Obama and Hillary have had those in their campaigns.

Now you see what I mean, he has become a metaphor even more than an actual candidate. He is a symbol for conservatives and a fly in the ointment all at the same time. He is not dependent on or looking for money because he is self-funding. That irritates insiders and outsiders alike. It’s the worst thing that could happen from the estabos’ point of view and the best for many conservatives because he gives voice to off-the-table issues. One you cannot ignore. We were always told if you do not like something, wait till the election and we’ll have that conversation. This is the metaphor election for all those “next election” lectures. Trump became a metaphor for what is wrong with our country and system.

Yet all he has to do is stand there, and by doing so he represents all those concerns and issues along with being a representation of many popular sentiments in the nation. Like him or hate him. And Obama is a backdrop reminder of what’s wrong. Trump is a giant symbol, whether you agree with his positions or not. He claimed the turf.

So what has the media done? They have made him the poster child for these so-called radical positions. And then they parlayed that over the entire conservative, right-wing Republican Party.(Bernie Sanders eat your heart out) But that has not hurt Trump, in fact he embraces it. As do his supporters. (as if you can ‘out-brand’ a brand master)

Of course that infuriates the GOP establishment, because they don’t want to be tainted(branded) with all his statements and positions. Tsk, tsk, but that is the establishment Donald s running against and at odds with, the establishment people are so infuriated with. Media sort of does his work for him. You know the drill: one Republican says some inflammatory thing and media goes person by person to ask if you condemn these remarks? If not, then one is condemned for the same statement.It’s the outrage game. He’s branded Republicans against the will of the elites and establishment.

“I think that if he wants to be considered as a real candidate, he has to start to temper some of that rhetoric because… while the truthfulness , the candor and the directness of his speeches was appealing for a period of time… in order to be considered, to me — and I’m crazy about Donald – presidential timbre, there has to be a measure in the way you present your argument. They were hungry for plainspeak and Donald is plainspeaking. “

So, give up and tone down on everything that has worked for him, so far.

10 comments on “Trump the Metaphor”