…to turn back the hand of time.

So on the eve of 9/11, Obama takes to prime time to announce his supposed plan against ISIS, which he calls ISIL. He could have given this speech at any time in the last 9 months. He didn’t and made it on this particular day, after his dwindling poll numbers came out.

I won’t even give it a word for word reply because there is really nothing new. But he did say, once again, that ISIS is not an Islamic organization. Nope, it’s not..it’s not! That came early in his slithering rhetoric so it could have muted anything after.

But there is one other point that deserves mention. He said this action is designed to save and help those displaced by ISIS. Its too late, ISIS did that months ago. He watched it, or maybe he didn’t read those briefings? But now that the damage is done, he promises continued humanitarian aid. I bet they wished help would have really came to prevent what ISIS did. He did have an answer, someone said thank you, America, for coming. That was supposedly for his help earlier on Mt. Sinjar. (aid and persuade campaign)

“We cannot allow these communities to be driven from their ancient homelands,” Obama said.

How can you return to a burned home, or without the family that were slaughtered? Of course that was the whole idea of ISIS to be so brutal as to drive the people out for good. Message received. But Obama, always late to the game, now offers them cordial sympathies and promises of hope. Be careful about Obama’s promises of hope.

He spoke quite literally the way Democrats do about war strategy. The saying is that they are always fighting the last war. In this case, Obama was making a speech on a commemorative eve of the 9/11 attacks. Or that was supposed to be the backdrop. But that backdrop is of being attacked, and then there was the attack on his watch in Benghazi.

Was it an attempt to rehabilitate his image and indeed the day? Maybe. A day which two years earlier he wished to erase. A day that came at the worst time of his presidency, campaign eve of reelection. And a day which he wanted to ignore even before the Benghazi attack happened. If anything became clear, it was that Obama wanted no part in either Iraq, or the war on terrorism. What do you know, they both showed up in the same place. What are the chances?

Then he had for a year ignored the problems in Syria, after laying down a red-line which he himself ignored. He wasn’t interested in that and Putin gave him an out. His lack of attention on Iraq did not go unnoticed either. The original ISIS, an off chute of al Qaeda in Iraq was driven from Iraq in the war. It festered in Syria and gained traction during the civil war before moving right in to Iraq.

One can say it was albeit a direct creation of Obama, and his policies. Democrats resist the temptations, they say, at extended stays in countries. So be it. They claim they are not against justified actions in countries though. But we saw their prototype version in action in Libya. And it was a stunning failure. Another thing Obama immediately ignored. Our enemies didn’t. His Libyan adventure laid the groundwork for Benghazi.

Obama had already forgotten about Libya prior to the Benghazi attack. It was in the rear view mirror. And Biden told us, if we were looking for a bumper sticker, which Dems undoubtedly were, it was that “Osama bin Laden is dead and GM is alive.” (even if GM was on life support) Who cares about details? Their message sold, evidenced by how many Dems repeated it ad nausea. Whether it is true or not never mattered to them. Success in a soundbite over success on the battlefield.

Now he says he is going to counter a “warped ideology” which earlier he denied was real. He has not lacked opportunities to counter it. We had Christians slaughtered across the Mid East. They were driven almost completely out of Iraq. The black-flag Islamists marched across the ME. He may be the only one in the world willing to claim it is not Islamic. I said before he should leave the apologetics to Islamic scholars, who do not dispute the point. That they are killing Muslims, too, means exactly what? If this is his answer to evil, to revise it, then I question and reject everything about it. 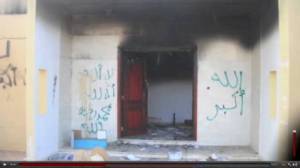 You knew it was bound to happen sooner or later. I’ve already seen it throughout the web and on news channels, inferences that Hillary running in 2016 should not be about Benghazi. That it will be yesterday’s news.That she’ll still handily win, regardless.

And true to Liberals’ form, they have already announced on social media that Americans either “won’t believe” Hillary had any culpability, won’t know, and just plain “won’t care”. In effect, it will be old news by then.

Well, God help us all when most Americans no longer know or care about what happened in Benghazi.

May we never forget Benghazi.
And may those responsible never sneak quietly into the night.