Well, as long as Al Gore was okay, which is what we were all wondering. He and Michael Bloomberg were both in Paris, as was someone from the Weather Channel.

Brian Williams got confirmation about their safe whereabouts in his Paris coverage.

He didn’t account for the rest of Paris’s population, but at least those were okay.

Okay, Global Warming and Climate Change, move over there is a new kid in town. The eminent end of the universe is coming, they say.

You’ve heard of the Big Bang, but what about the “Colossal Crash?” Get ready, because it might be coming sooner than you think … relatively speaking.

In a paper published in Physical Review Letters a group of physicists have theorized a mechanism for “cosmological collapse” which predicts the universe will at some point stop expanding and then collapse back onto itself, destroying us and pretty much all matter.

So here is my parallel. If and when Al Gore ceases to hyperventilate about Climate Change or Global Warming, it will cause a black hole and a super vacuum which will suck us all back to the original big bang and we will be burnt in the exhaust. Baring that gigantic IF, this is the next thing that could take Al Gore and his scientists out of the spotlight.

And the worst part, for Gore fanatics, is it won’t be blamed on humans or fossil fuels. So science — the final frontier — may be done in by… science. Sort of like the Big Unbang. 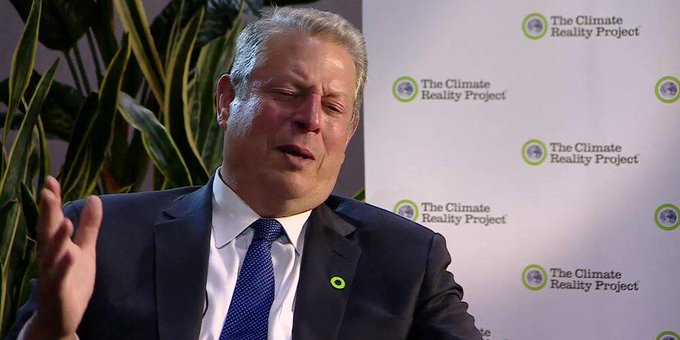 Mr Gore sat down with the BBC’s Jon Donnison in Australia, where his organisation, The Climate Reality Project, was holding training sessions to educate future leaders in the fight against climate change.

Australia’s conservative Prime Minister Tony Abbott is viewed by many as a climate change skeptic and once described the science behind human-induced global warming as “absolute crap”.

“We’re way past time where it’s responsible for any national leader to reject the science behind the climate crisis,” Mr Gore said.

Eight years after he released the film An Inconvenient Truth, Mr Gore said we have come a long way in awareness of global warming, but there is still much more to be done to find solutions.

Unfortunately, Al Gored never heard of the Caliphate. Though Climate Change Caliphate does have a certain ring to it. Call it the “CCC” for short.

Gore is over the edge but how has he not hit bottom yet? That makes two things that can be described as “absolute crap”.