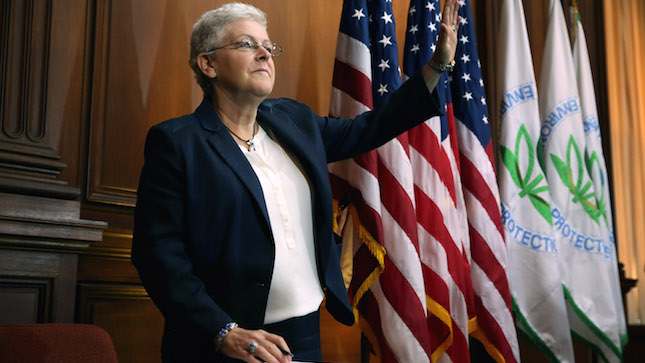 Is our government out of control?

Unelected bureaucrats are seizing control of our energy industry, killing jobs and hamstringing our economy.

CFACT’s Paul Driessen lays out the staggering facts at CFACT.org:

“No one even knows how many Executive Branch agencies there are – estimates range from 60 to 438 – much less how many new rules they implement and impose each year. Officially, [CEI’s Clyde Wayne] Crews says, they issued a staggering 3,554 new rules in 2014, while President Obama signed ‘only’ 226 new laws enacted by Congress. Worse, of the 53,838 (!) formal final regulations included in the Federal Register from 2001 through 2014, only 160 (0.3%) received a ‘cost-benefit’ analysis; we have no idea how the rest affect us.”

Ironically, President Obama is attempting to invoke the rule of law as requiring a vote on his nominee to the Supreme Court.  Yet the Constitution requires no such thing.

“The Constitution is not a living organism,”  Justice Scalia reminded us,  “It’s a legal document, and it says what it says and doesn’t say what it doesn’t say.”

Take a look at the full report Paul Driessen has compiled at CFACT.org.

He makes a frightening case.  We need to reduce the size of all this government and get it back under control.

Washington is out of control. Legislators, judges and unelected bureaucrats want to control our lives, livelihoods and living standards, with no accountability even for major errors, calculated deception, or deliberate, often illegal assaults on our liberties and on citizens who resist the advancing Leviathan.

These themes animate Republican and conservative politics because they are happening – regularly. [more..]

Years back, Fmr jurist Sandra Day O’Connor said that about 85% of SCOTUS cases deal with federal regulations, despite all the public attention certain cases receive.

India, Brazil and other nations hope to copy it.

There are many tragic flaws when international global warming agreements are penned. Among the worst is the willingness of the leaders of the West to turn a blind eye to how useless their economy-wrecking global warming policies are when considered in a global context.

While President Obama is waging war on coal and oil, China is building coal plants as fast as it possibly can. Chinese coal use is poised to surpass the entire rest of the world’s use of coal combined.

China and the other so-called “BRIC” nations are more than happy to step up as the developed world steps down, and will happily produce the goods that our escalating energy costs and regulatory burden make too expensive to produce at home.

President Obama’s recent global warming deal with China is totally one-sided. The U.S. committed to capping emissions (and damaging the economy) now, while China has until 2030 to maybe, if they feel like it, consider capping emissions then. 2030 is when China projects its emissions will peak in any event.

This deal was naive.

Meanwhile, global warming regulations will drive up prices for Americans, while any miniscule effect on emissions is dwarfed by China’s increase.

Consider this astonishing fact that Bill Gates blogged about and the Washington Post picked up:

China used more cement in the last three years, than the U.S. did in the entire 20th century!

That’s how fast China is expanding.
Sure, five percent of human greenhouse gas emissions are attributed to cement (if emissions are your thing), but what that tremendous growth really tells us is that global warming policies that depress the economy may advance the agendas of the developed world’s warming-Left, but will have no real impact on global emissions.

If you think Obama’s deal with China was bad, just wait to see what he’s prepared to sign at the big UN climate conference in Paris this December.

The need to educate the public has never been greater.

For nature and people too,

P.S.   China’s rapid, massive industrialization is exactly the kind of crucial fact that global warming pressure groups do not want discussed in the context of climate.  Sign the petition to stop climate censorship.  Share it with as many people as possible.  There is too much at stake to allow the warming-Left to muzzle speech and hide the facts.

How China used more cement
in 3 years than the U.S. did
in the entire 20th Century

and from Bill Gates

I admit what got my attention was the amount of cement China used. Tell-tale signs of a country under construction. But take a look at that picture, it is astounding.

Let that mental image sink in with the concrete facts. Just incredible, isn’t it?

From CFACT — Committee for a Constructive Tomorrow

Is there any limit to how far EPA can go?

EPA is promulgating new regulations at an astounding rate.  It is expanding its power by stretching environmental laws beyond the recognition of the legislators who adopted them.

When regulatory agencies enlarge their power, they distort our constitutional system of checks and balances.  When EPA moves beyond sound science and policy, it burdens our fundamental private property rights and distorts and slows our economy, killing jobs and stifling industry.  Sadly, the country receives no meaningful environmental benefits, despite the staggering costs imposed.

James Madison wrote in Federalist 48 that, “it will not be denied that power is of an encroaching nature and that it ought to be effectually restrained from passing the limits assigned to it.”

The job of restraining government falls to the Supreme Court.

The Supreme Court recently heard oral arguments and will render decisions on matters which we hope will place EPA in check.

Paul and other legal scholars recently drafted two legal briefs which CFACT submitted to the Court.

It is time for the Supreme Court to do its job and as Madison told us, “restrain” EPA from “passing the limits assigned to it.”

For nature and people too,

Can the media ignore both the global warming nature of the expedition that got itself trapped in Antarctic ice, and 2013′s massive growth of Antarctic ice as well?

The Polar Star will leave Sydney today after taking on supplies prior to its voyage to Antarctica.”

US Coast Guard ice breaker to assist ships beset in ice in Antarctica.

Icebound and down, loaded up and stranded
We tried to do what they say can’t be done
We got a long way to go and no way to get there
I’m icebound, just watch ol’ liars run.

Not like Jerry Reed would do it but, hey.