Comedian Kathy Griffin said in a new profile that she was instructed by CNN’s top executive, Jeff Zucker, not to do more than four jokes about President Trump during the network’s annual New Year’s Eve special.

Griffin said in the New York magazine profile, published Sunday night, that she was specifically told by Zucker that she shouldn’t do more Trump jokes because it could set off the then-president-elect

So CNN made her tone it down? Yeah, the CNN who runs opposition for Resistance.

(WASHINGTON EXAMINER) — Comedian Kathy Griffin said she is no longer sorry for the controversial photo in which she posed with a fake severed Trump head covered in stage blood.

“I am no longer sorry, the whole outrage was B.S., the whole thing got so blown out of proportion and I lost everybody,” Griffin told the Seven Network in Australia about the incident in May. “Like, I had Chelsea Clinton tweeting against me. I had friends, Debra Messing from ‘Will and Grace,’ tweeting against me.”

Griffin blamed “hardcore” Trump supporters for the fallout, which included her firing from CNN, and pushed back against assertions that even Democrats thought the shoot was out-of-line.

Shunned, shunned, shunned. “I lost everybody” means she lost libs, too, which she never expected. That’s why she is not sorry, cue the cheers from the Left.

Now Griffin is a victim? I wonder if she she’s associated with Hillary Clinton’s campaign?
I know, that’s a stupid question.

Kathy Griffin has hired high-powered attorney Lisa Bloom and will hold a press conference Friday to address the firestorm surrounding the viral image of herself holding the bloody, decapitated head of President Donald Trump and the “bullying” she claims she has endured at the hands of the Trump family as a result.

From celeb culprit to victim in 24 hours. Whew! I suppose next, after claiming the entire Trump family bullied her, she’ll demand an apology from the Trump family. I know what would be great, Kathy, if you could have Baron Trump apologize to you. What a freak.

Well, now we know what her New Year’s Eve act would have been like, if she wasn’t fired. Well, CNN can always rehire her in time. What an attention whore.

Addendum: I have a great idea for Victim Kathy. She should go after CNN for terminating her as part of a media harassment campaign. Yeah, that’s the ticket.

And when you lose Al Franken, you have really lost the left country. Franken had been running around associating himself with Griffin even saying he wouldn’t cancel an upcoming appearance with her.

Are you in luck, Kathy, it looks like you could have another bully person to go after. Al Franken, the perfect target.

Franken To Griffin: On Second Thought, It’s Best If You Just Skip My Book Event

“I believe what Kathy Griffin did was inappropriate and not something that should be anywhere in our national discourse. I consider her a friend and I’m glad she realized she crossed the line and apologized,” Franken said.

He added, “After hearing from many Minnesotans who were rightfully offended, I’ve come to the conclusion that it would be best for her not to participate in the event we had previously scheduled. I understand why Minnesotans were upset by this, and I take that very seriously.” [via Politico]

Bullying isn't a stand in for everyone universally rejecting you. https://t.co/qWU2AiuSXl

Griffin hires celeb lawyer, plans news conference to "respond to the bullying from the Trump family she has endured" https://t.co/09grXlSujk pic.twitter.com/z05di4Xm7r

Wow, Kathy’s list of bullies is getting almost as long as Hillary’s. Congrats.

Check this out for someone claiming victim status. Note December date: 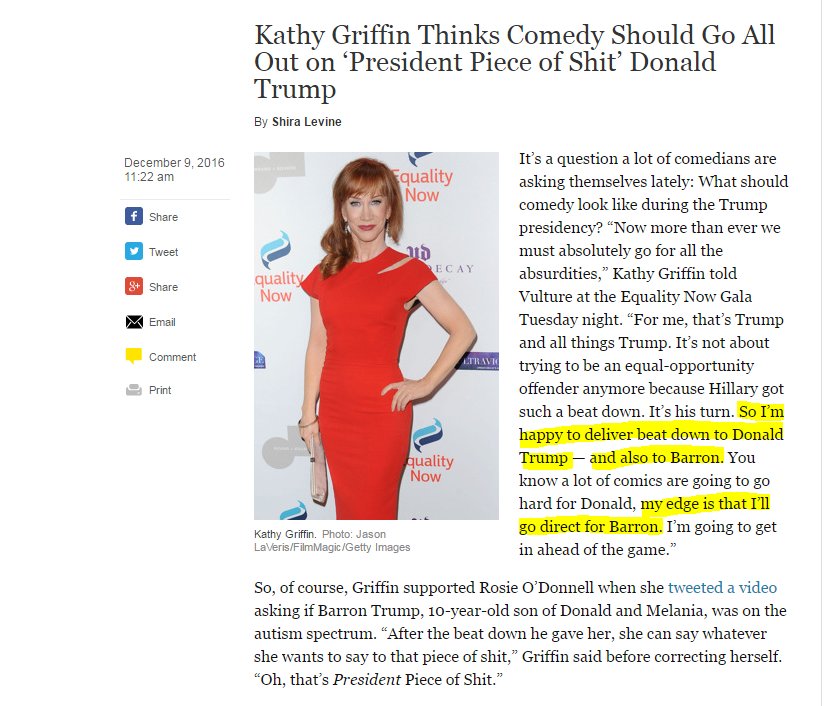 Yet Kathy Griffin acts that way to get attention. Riddle me this: what does she do when she gets the publicity? That’s the problem.

Entertainment website TMZ was granted exclusive access to a photo shoot organized by Ms. Griffin and photographer Tyler Shields. Gruesome video provided Tuesday by the comedian and former Bravo “My Life on the D-List” star shows her holding a representation of Mr. Trump’s head in ways reminiscent of terrorist propaganda.

“This is fake blood, just so you know,” she said in video provided to TMZ. “I won’t give away what we’re doing, but Tyler and I are not afraid to do images that make noise. He also lights me to the point where I look about 15. First I’m an artist, but really it’s good lighting.”

The writer, who annually appears with CNN’s Anderson Cooper for the network’s New Year’s Eve broadcasts, then joked that she will have to move to Mexico to avoid the consequences of her actions.

No date was provided for the project’s release date.

D-list talent? She has to be an E-minus. Project Puke.