I don’t think these guys stood out or anything. Oops. That’s some haul.

The suspects, from Brooklyn and Queens, were arrested Wednesday on charges of heroin trafficking. During the arrests, authorities recovered about 12 kilos of smack — worth about $900,000 — at a stash house.

Brooklyn federal prosecutors say the men were hooked up with a Mexican drug cartel and crossed the border to coordinate with conspirators. …/

As the world turns, money also moves from place to place. Well, I mean wealth. There was an interesting report a year ago showing the statistics of wealth moving about the world.

While not completely detailed with cause and effect and all, it is a 30 thousand foot view anyway of the movement among wealthy people of different categories. And a report about the supper rich and billionaires. This was for 2016, so I wonder what it is this year?

There were some surprises. Interesting trends.

Among countries losing millionaires(in their definition) by migration between 2015-2016 are: France, China, Brazil, India, and Turkey. In that order of loss.

The countries gaining millionaires by migration are: Australia, US, Canada, UAE, and New Zealand. Australia in the lead and the US second.

The wealthiest places in the world ranked as having the most millionaires by region: Asia-Pacific 5.1, all North America 4.8, Europe 4.2, Middle East 0.6, Latin America 0.5, Africa 0.2.(the place with the diamonds?)

See links in this order.
http://www.marketwatch.com/story/this-country-is-no-1-for-millionaire-migrants-and-its-not-the-us-2017-02-27?mod=MW_story_top_stories

The Obama administration funneled billions of dollars to activist organizations through a Department of Justice slush fund scheme, according to congressional investigators.

“It’s clear partisan politics played a role in the illicit actions that were made,” Rep. John Ratcliffe, R-Texas, told Fox News. “The DOJ is the last place this should have occurred.”

Findings spearheaded by the House Judiciary Committee point to a process shrouded in secrecy whereby monies were distributed to a labyrinth of nonprofit organizations involved with grass-roots activism.

There is a recent effort by Republicans to eliminate the practice, which many believe was widely abused during the Obama administration.

When big banks are sued by the government for discrimination or mortgage abuse, they can settle the cases by donating to third-party non-victims. The settlements do not specify how these third-party groups could use the windfall.

So far, investigators have accounted for $3 billion paid to “non-victim entities.”

Critics say banks are incentivized to donate the funds to non-profits rather than giving it to consumers.

(Washington Post) – A small core of super-rich individuals is responsible for the record sums cascading into the coffers of super PACs for the 2016 elections, a dynamic that harks back to the financing of presidential campaigns in the Gilded Age.

Close to half of the money — 41 percent — raised by the groups by the end of February came from just 50 mega-donors and their relatives, according to a Washington Post analysis of federal campaign finance reports. Thirty-six of those are Republican supporters who have invested millions trying to shape the GOP nomination contest.

In all, donors this cycle have given more than $607 million to 2,300 super PACs, which can accept unlimited contributions from individuals and corporations. That means super PAC money is on track to surpass the $828 million that the Center for Responsive Politics found was raised by such groups for the 2012 elections.

In an interview with CNBC, Ted Cruz declared “we’ll take money from anyone.”

Ted Cruz doesn’t care where the money comes from.

Even as his campaign has pushed a populist message and he has railed against Wall Street “crony capitalism” repeatedly, the Texas senator indicated Friday that he is not beneath accepting donations from anyone, including from members of the financial industry, which has already contributed $12 million to his campaign.

Appearing on CNBC’s “Squawk Box” Friday, Cruz again referred to the Dodd-Frank Act as benefiting large banks at the expense of the “little guy,” or smaller community banks. Co-anchor Andrew Ross Sorkin then pressed the candidate about his “rivals” criticizing him for soliciting donations from the same people whose industry has spoken out on the campaign trail.

But of course there was money involved in Bill Clinton speaking at the Happy Hearts Fund charity fund-raiser. What other reason could there possibly be?

I suppose I’ll go back to wondering why someone doesn’t set up a sting to see how far the Bubbster will go? You can’t tell me there is not a celeb or official who would work with them as an informant.

Well, you can’t expect either Clinton to actually do a speech for … charity. That would be so taboo. On the other hand, not like they really care what it is or how it looks.

Whenever there is a question about conditions in Baltimore, the answer is always more money. Maybe that isn’t completely fair.

Well, the first answer is what is being spent is just not being “spread evenly”. 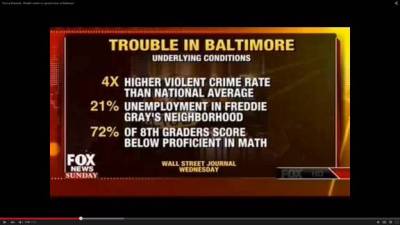 So if you just apply more ointment (money) to the wounds (conditions), it will bring everything right up to standards. Or something like that.

That’s the sales pitch anyway. See right before the riots, Mayor Chaos-Blake was in the process of doing just that, asking (Republicans) for mo’ money for schools. (and stuff)

And darn it, now she’ll probably have to go ask for even more because the people are destroying the city. Not to mention the very students in those schools developed a penchant for chucking rocks and bricks at police. But never mind that now.

Anyway, they are all only doing that because they don’t get or have enough money. If you will only give them more money, they will not be destroying their neighborhoods.(no proof but so what?) It’s so simple. Spend now, or spend more later…. or both. See video below.

Translation: Just spread that wealth like peanut butter and we’ll tell you when to stop. We can’t manage our city but we know when enough is enough, trust us.

Well, if the speaking fees (and amenities to match) were not enough to draw even the ire of MSM, then it has gotten worse since. But it is still all about money, surprise. That’s what Clintons are about, after all, and lots of it.

Last year at this time, MSNBC even got into the outrage that HRC was getting 275,000 for an hour-long speech at SUNY Buffalo. Then MSM dared to ask the question of all questions: why did Hillary take the money? Why couldn’t she wave the fee or just do it for free? That would never cross Hillanista’s mind. And she also could not forgo the rich amenities she demands with it either. Like a crook leaving some cash behind, she could not do that. The money is the whole point. How much are her words worth?

Now we have the uncovering of the Clinton cash component entangled with her corrupt State Department term. Then we have Hillary’s pronouncement of her 2.5 billion dollar campaign plan for 2016. Maybe that kind of cash was meant to scare Republicans. Alright, can you imagine Rand Paul raising and waging 2.5 billion dollars? I don’t think that’s going to happen. What about any other contender? Not likely but a 5 billion-dollar election for president? What does that say about America? Jeb, are you up for that?The whole point is what does it say about the Clintons? By the next election, how about a quarter of a trillion? Trying to ante up in this high-stakes game makes it extremely difficult.

So are Clintons out to buy our process? We already know they are globalists with their eyes set on the world. Is this their means? They can claim, while doing it, that they are doing a lot of good. The moral to the story, from progressives’ perspective, is what does it matter how many millions they are raking in if they are doing some good? (how much does mosquito netting cost these days?) The Clinton Global Initiative is really the Clinton Initiative — by Clintons for Clintons.

Contrast that with Hillary’s campaign. It seems oddly ironic to run a campaign theme of fight for the little guy, her anti-one-percenter theme. The Clintons entire objective is to raise money — and there are no glass ceilings. But they think they can get away with it because, after all, they are the Clintons. Who can deny the Clintons what they want?

So will America empty its pockets into the coffers of Clintons to get another Clinton elected? Isn’t it time America puts the Clinton Clowns out to political pasture? If not now when? We cannot separate them from their cashola but we can say enough public offices on our dime. They prove how effective they can be without political power — shadow government and all — so why give that to them, too? (be glad to get rid of them)

Their collective political bios should already be written and finished. What more do Clintons need or want to get from our government? Because we know it is about what America will do for them, not what they would ever do for America.

Plus, we will have another guy leaving the White House to suck oxygen out of the universe. That is bad enough on the face, so why put another Occupier into the Oval Office again on top of it? Hillary shows how lucrative the speaker circuit is for her. Same for Bill. And Obama is bound to enrich his wealth on the same and he’ll have his ___ organization. This stuff just keeps going on and on and on, and it seems nothing is going to stop it.

The many, the proud, the arrogant… and the powerful

Rep. Bruce Braley (D., Iowa) shot to fame last week for his cringeworthy gaffe, making Iowans question whether or not he really is the man for the Iowa Senate seat, for which he is running.

In front of a group of trail lawyers, Braley mocked Grassley saying he is “a farmer from Iowa who never went to law school.”

Though he has since issued an apology, Braley’s dig at Grassley could cost him the election as Americans are becoming weary of lawyer politicians and a legal system they believe is out control. […]

Becoming? Americans have been weary of them for years. It’s the kind of self-serving flatulence that’s ruining our environment. (not the only)

John–“two Americas”– Edwards should be their poster child. If people think Democrats stand for the little guys, think again.

“I loved it for the decades I did it, and I think it’s what I was born to do,” — Edwards said on opening a new law firm last fall, with an office in DC.

The only known example of the 1891 $1,000 Treasury note in private hands has set a new world record for a US banknote at auction, leading Heritage Auctions‘ April 24-26 & 28 Currency Signature Auction in Chicago.

The note’s provenance includes some of the most prominent names in US currency collecting, further increasing its desirability for those prepared to make a bid. Starting it $1.2m, it quickly rose past its expected sale price of $2m to sell for $2.5m – a 29.2% increase.

The only other example has been housed in the National Numismatic Collection of the Smithsonian Institution since it was transferred there by the treasury department shortly after printing.

Like the Grand Watermelon, the 1891 note features a striking vignette of General Meade, who is noted for taking control of the Army of the Potomac on the eve of the US civil war’s Battle of Gettysburg. He was once described as “a damned old goggle-eyed snapping turtle” and was renowned for his bad temper, which the engraver has certainly portrayed on the note.