Holding fast to conspiracy narratives pushed by Hillary Clinton (and her campaign of trolls) on Russia meddling, misogyny, racism that cheated her out of her destined Ovalating Office. Unfortunately, she is right, that media will follow her lead every time. While she and the entrenched media establishment are baited and trolled by Russia. They would take career Russian propagandists word or version of events over Trump’s almost every time.

It’s really easy if you are in the Kremlin hell-bent on sowing discord in America. If destroying credibility in American institutions is their goal, then the Left hands them a victory flag. So even when Trump goes to Poland to make a classical academic defense of western civilization, especially then, they have a collective panic attack and cannot recover. But intensive care could not treat their disease.

Then came his next trip to France with liberal Macron, their macaroni boy of Paris they fell for head first. This time MSM decided to downplay coverage of the visit ignoring most of the ceremony, except the presser to push Russia questions. Even the centennial of WWI and France’s Bastile Day got marginal coverage. Jake Tapper called it just a photo-op for Trump. Right a 100 year anniversary is just a photo-op , world history just gets in the way. After all, that is the way they see it.

So now, once again, another historical marker pops up that media seems too preoccupied with Russian propaganda to notice — or give due diligence to. It’s like you have this Russian spy novel playing out in the background to obfuscate any real news.

Saudi Arabia has lagged the U.S. in oil production for the last four years, according to federal data compiled by University of Michigan economist Mark Perry.

Perry created a chart Saturday showing just how far behind Saudi oil production has trailed U.S. production. Rising U.S. production combined with OPEC policies drove crude oil prices down to new lows. Monday, a barrel of oil costs $46.26, while the same barrel would have sold for $109.04 in June 2014. 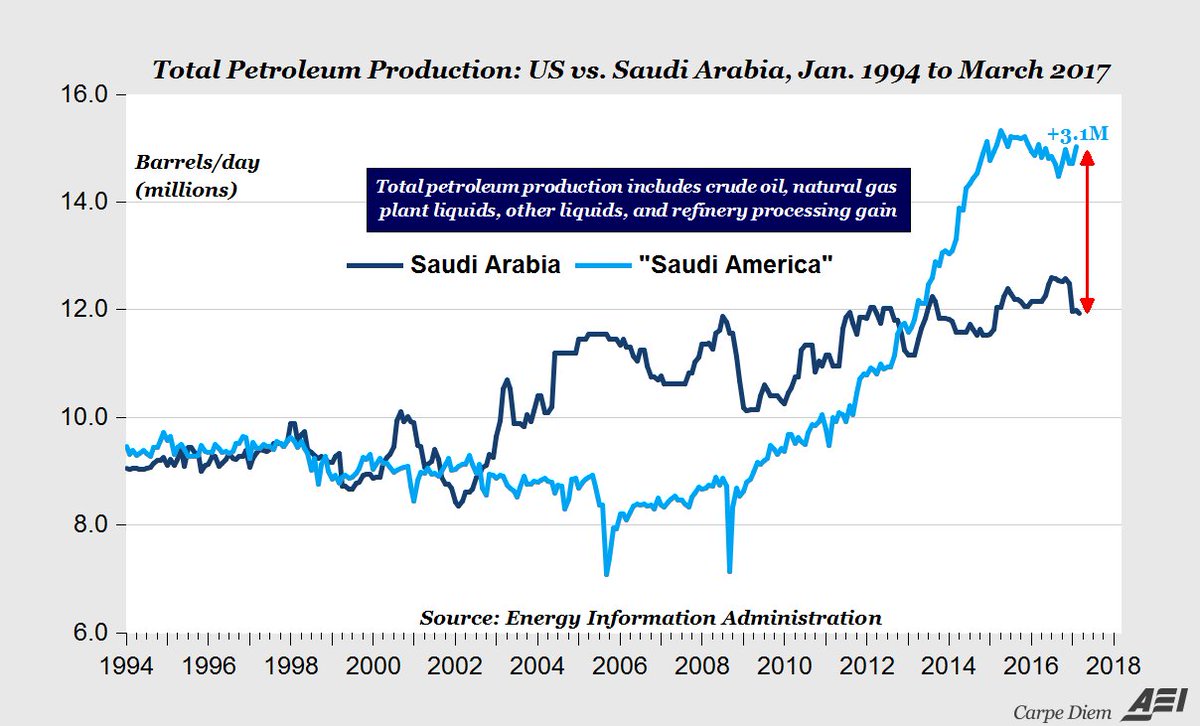 And yet they wonder why we call MSM Fake News? Everything positive — as they define it — about their messiah’s golden throne was heralded from the mountaintops to make sure it echoed to anyone. It was unavoidable. They ran his Saturday addresses to tout all the great, but invisible, good news. It was good because they said so. Job numbers, even when bad, were called good. Or, as the Bible says, “those who call evil good and good evil.” And it worked, or saturated the airwaves to a point no one else could be heard.

Spending, national debt, budget issues. Remember Obamafiles claimed he halved the budget ‘deficit’ to cover the 2o trillion dollar explosion. The fairy dust worked, put some lipstick on that pig and sell it like the sweety-pie lie it is. He depleted the military, and budget, but who cares about that thing? All is good, they said. ‘These are the good times.’ Never mind that you did not see or feel it. You weren’t alone though. Most didn’t, still you had to listen to regurgitated talking points of how great things were going.

No, we weren’t wrong. Our instincts were not misguided. We weren’t misinformed. We were not too stupid to understand. We were not uneducated halfwits. We were just being constantly lied to on such a level, to such a degree, that Americans never were subjected to before. Even low information voters knew something was wrong. Economists, real ones that is, were not impressed. But even they had a hard time getting any information out. It was all being blurred, blotted out, and intentionally drown out by the so-called good news coming directly from, and being dictated by, the White House.

Remember Benghazi, IRS, Lois Lerner, or Fast and Furious? Leading from behind was actually a defense strategy they could get behind. Meaningless red lines were all the rage. Russian intervention? It really is not intervention when you are inviting them into Syria and altering your national policy to their liking and getting nothing in return. Of course that is not intervention. That is failed US leadership like we never experienced before either. It was complicit failure. Now they are paranoid about intervention? They opened the door, invited them in, coalesced with them. Is it any surprise Russia wasn’t the greatest or most respectful house guests, when Obama shows no respect for our own house?

Then, to top it all off, when Obama left he had them all declare that he had a completely scandal-free administration, not even a little one. Remember that? So it was an insult on reason and intelligence. It was a fraud. Obamacare was created, built and sold on lies. They named it the Affordable Care Act.

The article above, while it is good news to be ignored under Trump, will likely be co-opted for propaganda value by Obamafiles — who are just as active outside the Office as they were in the White House. So they are quite anxiuos to take credit for anything good. It is what they do. Though our growth and oil business in particular was in spite of Obama’s war on energy, not because of it. But that doesn’t stop them from laying claim.

Anyone dishonest enough to prop up Obama’s regime for 8 years is certainly going to use any dirty trick to that end, to credit Obama with a net positive. A guy like Obama that never had to live under or feel the effect of his own policies. Calling evil good was quite popular, getting even easier with practice. It was instant revision everywhere.

So now that we have oil production growth, who do you think can find fault with our achievement? That’s right, the same people who will gladly try to lay credit to it. But the Left’s “green” team will condemn it as a negative. Oil, fossil fuels is bad juju. Which is why we knew Obama was never supportive to the industry. Yet he wants credit? In your dreams, Obama. And if America was not as innovative, like we’ve always been, this could not have happened. Certainly it was nothing Obama had a hand in.

However, we shouldn’t be afaid to admit good news, because some of it took place under Obama’s tyranny. It began and was under way before him. Like Clinton had the benefit of the tech boom. But Obama did about everything he could to step on it.

Under Trump, all good news will be summarily buried, or tortured by Obama revisionists if it refuses stay in the hole. Since the Left controls the media, that is the way it is. And whatever they can tie to Obama’s Legacy of Lies, they will. Memory Lane is not a place I’d want to live, if I were Obama

DUPO, IL – Fourth graders in Dupo Illinois are reading a biography of Barack Obama that’s raising eyebrows among St. Clair County parents. The book, which supplements the school’s Common Core curriculum, blames television for the negative behaviors the first African-American president picked up as a teen:

The book – brought to the attention this week of those on the “Moms Against Duncan – MAD” Facebook page, goes on to say white Americans were hesitant to vote for a black president, and that Obama pushed the race issue to bring the nation together.

“But some people said Americans weren’t ready for that much change. Sure Barack was a nice fellow, they said. But white voters would never vote for a black president. Other angry voices were raised. Barack’s former pastor called the country a failure. God would damn the United States for mistreating its black citizens, he said.”

Surprise, what change they got! Bringing people together? He doesn’t seem to be so confused about who he is now.

The John F. Kennedy museum in Dallas told the Washington Free Beacon that it is planning to “completely update and revise” its permanent exhibit after a historian accused it of falsely depicting the 35th president as a big-government liberal.

Ira Stoll, author of JFK, Conservative, called on the Sixth Floor Museum last month to revise alleged “inaccuracies” in its exhibit regarding Kennedy’s views on social programs, the federal deficit, and tax policy.

The Sixth Floor Museum chronicles Kennedy’s legacy and his assassination in Dallas on Nov. 22, 1963.

Nicola Longford, executive director of the Sixth Floor Museum, said the permanent exhibit is 25 years old and in need of updating. She said the institution is planning a major overhaul after the 50th anniversary of Kennedy’s assassination next month.

“While Mr. Stoll has taken issues with the content of a few exhibit text panels, and encouraged priority attention for substantial updating and revision, it bears stating that this exhibit text is almost 25 years old,” said Longford. “Clearly the world has changed dramatically during this quarter century and now half century since the assassination.”

She added that the museum’s “intent has always been to completely update and revise our core exhibit post fiftieth anniversary (November 2013) and it is at this time that we will carefully review and consider all comments and recommendations.”

Stoll wrote in a letter to Longford that he was “troubled by some passages of the permanent exhibit text about Kennedy and his administration that struck me as inaccurate or misleading.”

He disputed the exhibit’s claim that “massive new social programs were central to Kennedy’s New Frontier philosophy,” calling it “just not true.”

“Kennedy was against ‘massive new social programs,’” wrote Stoll. “Kennedy described his own Medicare plan, accurately, not as ‘massive’ but rather as ‘a very modest proposal.’ And, as [Arthur] Schlesinger [Jr.] noted, he chose not to fight for even that.”

Stoll also took issue with a passage that refers to Kennedy’s “philosophy of using induced deficits to encourage domestic fiscal growth became a mainstay of American government under later administrations, both Democratic and Republican.”

According to Stoll, “Kennedy’s recipe for growth was not a deficit; it was a tax cut that, both by changing incentives and by putting more money in the hands of the private sector, would yield growth that would ultimately narrow the deficit by increasing federal revenues.”

He said Kennedy’s own statements and actual policies hewed closer to the conservative view.

“As for the idea that Kennedy’s deficits were a ‘radical departure’ from [President Dwight] Eisenhower’s balanced budgets, that is not supported by the evidence,” wrote Stoll. “Kennedy’s annual deficits—$3.3 billion in 1961, $7.1 billion in 1962, and $4.8 billion in 1963—were modest by modern standards and as a percentage of GDP.”

When contacted by the Free Beacon on Friday, Stoll praised the museum’s response to his letter.

“I’m thrilled to learn that, after receiving my letter based on the research in my book, JFK, Conservative, calling inaccuracies to their attention, the Sixth Floor Museum in Dallas has announced plans to revise its exhibit text panels,” he said. “I hope the new exhibit text portrays JFK as closer to the real JFK I describe in my book—a tax-cutting, pro-growth politician who favored welfare reform, free trade, domestic spending restraint, and a balanced budget over the course of the business cycle.”

Stoll’s book, JFK, Conservative, was released on Oct. 15. It argues that the 35th president, idolized by liberal Democrats, was actually a conservative on economic and national security issues.

Shocked that they were caught revising and distorting JFK. But they are now going to remodel the exhibit. Revisionists caught again. The truth is the enemy of the left.