On Wednesday, Obama travels to West Point to give his ballyhooed commencement — foreign policy address. That follows his Memorial eve visit to the troops in Afghanistan. Then he did place the wreath on Memorial Day at the tomb of the unknown soldier.

But he managed to completely ignore the traditional Armed Forces Day in speech and deed. He did, however, celebrate the international Anti-Homophobe Day. And so did the embassies. Are they starting a new tradition?

On August 31, 1949, Secretary of Defense Louis Johnson announced the creation of an Armed Forces Day to replace separate Army, Navy and Air Force Days. The single-day celebration stemmed from the unification of the Armed Forces under one department — the Department of Defense.

In an excerpt from the Presidential Proclamation of Feb. 27, 1950, Mr. Truman stated:

“Armed Forces Day, Saturday, May 20, 1950, marks the first combined demonstration by America’s defense team of its progress, under the National Security Act, towards the goal of readiness for any eventuality. It is the first parade of preparedness by the unified forces of our land, sea, and air defense”.

Even the NY times said May 17, 1952: “This is the day on which we have the welcome opportunity to pay special tribute to the men and women of the Armed Forces … to all the individuals who are in the service of their country all over the world. Armed Forces Day won’t be a matter of parades and receptions for a good many of them. They will all be in line of duty and some of them may give their lives in that duty.”

“The heritage of freedom must be guarded as carefully in peace as it was in war. Faith, not suspicion, must be the key to our relationships. Sacrifice, not selfishness, must be the eternal price of liberty. Vigilance, not appeasement, is the byword of living freedoms. Our Armed Forces in 1950– protecting the peace, building for security with freedom–are “Teamed for Defense …”

“Today let us, as Americans, honor the American fighting man. For it is he–the soldier, the sailor, the Airman, the Marine– who has fought to preserve freedom. It is his valor that has given renewed hope to the free world that by working together in discipline and faith our ideals of freedom will always prevail.”

Once again, from a New York Times article May 17, 1952: “It is our most earnest hope that those who are in positions of peril, that those who have made exceptional sacrifices, yes, and those who are afflicted with plain drudgery and boredom, may somehow know that we hold them in exceptional esteem. Perhaps if we are a little more conscious of our debt of honored affection they may be a little more aware of how much we think of them.“

Was the NYT speaking to Obama?
Lastly, this special note:

On the first Armed Forces Day, Soviet media Pravda denounced Armed Forces Day, calling it the militarization of the United States. “The hysterical speeches of the warmongers again show the timeliness of the appeal of the Permanent Committee of Peace Partisans that atomic weapons be forbidden.”

Alas, Pravda need not worry in 2014, no “hysterical speeches” were given by the Comrade-in-Chief. But it might have taken note of the unified commemoration awarded the LGBTQ agenda.

Obama should hang his head that he let the anti-Homophobe agenda upstage the honor of Armed Forces Day. No, he has the arrogant pride instead. And that message should carry loud and clear to West Point, and echo through Eisenhower Hall.

God Bless the troops. May we always honor and remember their ultimate sacrifices. 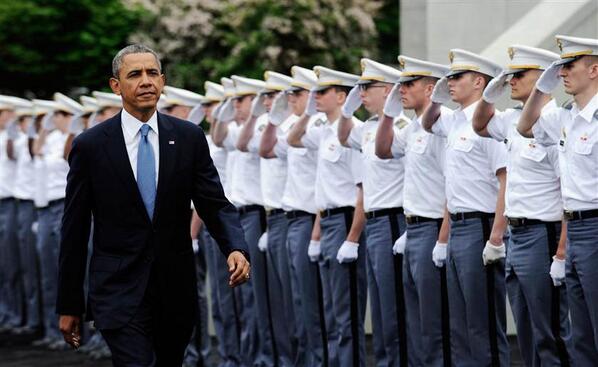 He lectured to West Point about “upholding standards that reflect our values”. Really, like the LGBTQ values? He also spoke about the need to “protect sources and methods” — after outing the station chief in Afghanistan just days before. A shout for “transparency”.

Well, the script Obama is reading from is in big conflict with its voice, his. It’s about priorities. A mention of climate change. He called Boko Haram an “extremist group”.

“Leadership”, Mr Obama? Surely you jest. But his real policy is the Denial Doctrine.
Straw Man Alert at West Point