Hillary has a new book. Didn’t she have books before? (aka., ‘it takes a village of socialists’; ‘uncomfortable with history’; ‘history on life support’) They act as if its some new insight. It’s called “hard choices”. She really dug deep for a title. Bush had a book called “Decision Points”. Sound similar? It could just as well be called ‘soft choices’, ‘no choices’, or ‘political choices’. Dare I say “wrong choices”? Look at all the fun Libs had attacking Bush’s book.

Ironically, Hillary as an authoritative source “requires the willing suspension of disbelief”, as does Obama. The Left complains about Republicans’ succession of candidates running the next person in line. This is Hillary’s turn. Damn the person who gets in her way.

Her book is only posturing. Except “Hard Choices”? Pulease! Her lack of wanting to make choices….and maybe that’s hard. (Let’s start off with a lie) What she supported she’s against, and what she was against she is really for, for now. It is “the evolution of a candidate.” Maybe that would have suited the title better? One thing Hillary should be noted for, her inability to make hard choices.

Like Jay Rockefeller, she supported the Iraq action it was convenient until it wasn’t. But she was hoodwinked. How abut Benghazi? Why do they like to emphasize what they are not good at? — Obama on foreign policy and budget issues.

She says one major accomplishment was restoring US leadership in the world. I always appreciate Liberals talent for revision. It never stops. Want to know their position on something? After the fact they’ll tell you. That’s leadership. Hillary declares she helped clean up Bush’s mess. But who cleans up Hillary’s messes? Now in her wisdom of reflection, she says:

“The most important thing I did was to help restore America’s leadership in the world. And I think that was a very important accomplishment. We were flat on our back when I walked in there the first time.

“We were viewed as being untrustworthy, as violating our moral rules and values, as being economically hobbled. And we had to get out there and once again promote American values and pursue our interests and protect national security. Because of the eight years that preceded us — it was the economic collapse, it was two wars, it was the war on terror that led to some very unfortunate, un-American actions being taken. That was my biggest challenge. It was why the president asked me to be secretary of state.”

Yea, values like abortion, appeasement, and leaving no Islamist behind, spying on angela Merkel’s cell phone, gun running to Mexico, rewriting immigration law from the Oval Office, getting an ambassador and three Americans killed and secretive arms running, lying about it, ignoring security threats in Libya (Obama’s war), supporting terrorists and thugs in Egypt. Values like that.

Now the scary thing is what more tricks she might have learned from Marxist-in-Chief. We’re heading for a trifecta: a combination of Bill Clinton politics, Obama politics, and her own.(triangulation on estrogen) She wants to sell it as a 3rd term for Bill and a continuum of Obama. And throw in some Elizabeth Warren and Al Gore for seasoning.

Obama, now what has not been said about him? Well, now he releases five top Taliban, for one deserter. Make sense? It does to the Liberal mind, which generally runs contrary to all logic. Oh, here’s something that hasn’t been said. Start by remembering the Clintons. Could the Taliban Five be Obama’s bin Laden. I know, he supposedly killed bin Laden. But that’s not the point. These five could be Obama’s bin Laden. Get it now?

Clinton was criticized for failure to get bin Laden. And how about the Cole? Remember the missiles where he just missed him? Everyone asked how he let bin Laden slip away. Yea, now these five are released. What does Zero’s act portend for the future? But Democrats have offered, ‘don’t worry, we can get them, kill them, drone them’. Remember the illusive bin Laden… it wasn’t easy, was it? Barry has no concept of the future or how he will be liable. He can’t even remember the lesson from bin Laden . All that matters to Democrats is the politics of now.

Team Obama finally gets a mastermind of the Benghazi attack, just short of 2 years, and he wasn’t hiding in a cave in Tora Bora. He did as many interviews as Susan Rice. But don’t worry about the Taliban Five, according to Liberals, we can can repeal their right to life on a moment’s notice. It has taken this long to do anything about Benghazi.

Hillary has the same mindset. Election and winning is all that is in her mind. She is practically anointed to begin with. She’s only looking out for anything that might jeopardize that. It’s the same mindset of Obama, “be on the lookout for anything which could destroy you” Self-preservation is job one. Everything else ranks a distant second to that.

Anything that has the potential to bring you down must be attacked, broken, or destroyed. Using Alinsky tactics of course. Show that any criticism flung at you is faulty. And she’s running to be the easy choice for Democrats. The only choice… what choice? She could have written, “How I created the vast right-wing conspiracy”. Foggy Bottom was only dress rehearsal. She could’ve called it “Rewriting History.” 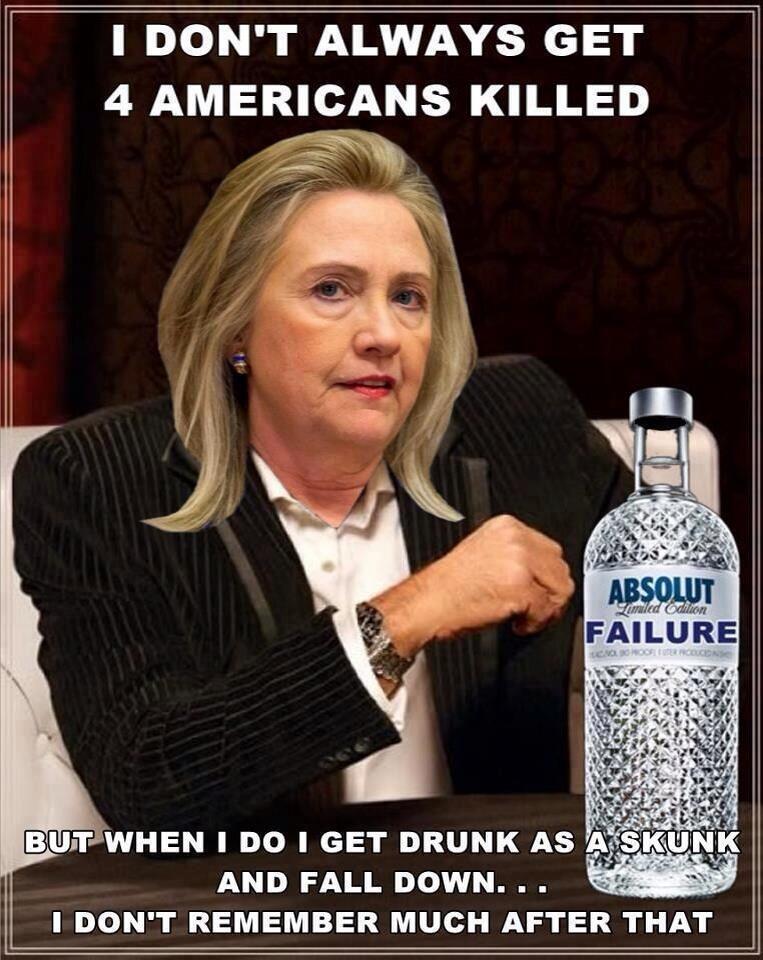 Miss full accountability, “the buck stops with me”, Hillary Clinton testifies to say “what difference does it make?”

I know it’s still only January but that is the line of the year. And it took her four months just to say that.

Clinton: With all due respect, the fact is we had four dead Americans.

Clinton: Was it because of a protest or was it because of guys out for a walk one night who decided they’d go kill some Americans? What difference, at this point, does it make?

It is our job to figure out what happened and do everything we can to prevent it from ever happening again, Senator. Now, honestly, I will do my best to answer your questions about this. But the fact is that people were trying in real-time to get the best information….But, you know, to be clear, it is, from my perspective, less important today looking backwards as to why these militants decided they did it than to find them and bring them to justice, and then maybe we’ll figure out what was going on in the meantime.

Clinton: “What difference, at this point, does it make? ”

She also misconstrued the purpose. The point is even more about the response and reaction of our government and why. This is the way they argue by moving the point. We thought it was about our governments’ response and she twisted it to just the terrorist’s motives. Both are questionable.

Then use the four dead Americans to mitigate government’s culpability. (logic took a vaction) And she tried to trump terrorists’ motives by a goal to “bring them to justice” — which they haven’t. See how this game works? Argued in true Liberal BS.

“What difference does it make?” It makes a big difference. How could you prevent this in the future if you dismiss the facts as irrelevant? Does that sound anything like, “do everything we can to prevent it happening again”?

We hold this non-truth to be self-evident, what does it matter?

PS: and the media yawns and says what difference does it make?